We Are Here Because You Were There:

Afghan Interpreters in the U.K.

‘We Are Here, Because You Were There’ documents experiences of Afghan interpreters, employed by the British Army who recently resettled to the UK, through portraiture and quotes. Centering Afghan interpreters’ own stories, photographer Andy Barnham and researcher Dr Sara de Jong invite viewers to engage with the people behind the headlines.

By centering on Afghan interpreters’ own stories, viewers are invited to engage with the people behind the headlines and numbers. ‘We Are Here, Because You Were There: Afghan Interpreters in U.K.’ also encourages reflection on the deep entanglement between the U.K. and Afghanistan, which have shaped Afghan interpreters’ lives from childhood or early adulthood. Together their individual stories and images reflect the structural and lasting impact of Britain’s military employment practices, migration laws and foreign policy.

The portraits have been taken and edited in a manner to help anonymise the newly arrived interpreters who have been at risk and who have family in Afghanistan still under threat. The individual portraits presented are a composite of up to a dozen frames which have each been completely blurred or pixelated and then merged to present a final portrait. This process can also be seen as inflicting trauma on the portraits, in acknowledgement of events experienced when serving with the British Army, other NATO forces and escaping Afghanistan.

The quotes are taken from in-depth interviews which cover the Afghan interpreters’ motivations to work for the British Armed Forces, their working alongside soldiers, the threats they faced in Afghanistan, their evacuation, their early experiences in the U.K. and hopes for the future.

Andy Barnham’s portraits from this project were winners in the portraiture category of the 2022 Prix de la Photographie, Paris (PX3).

004 Ended Up With Nothing 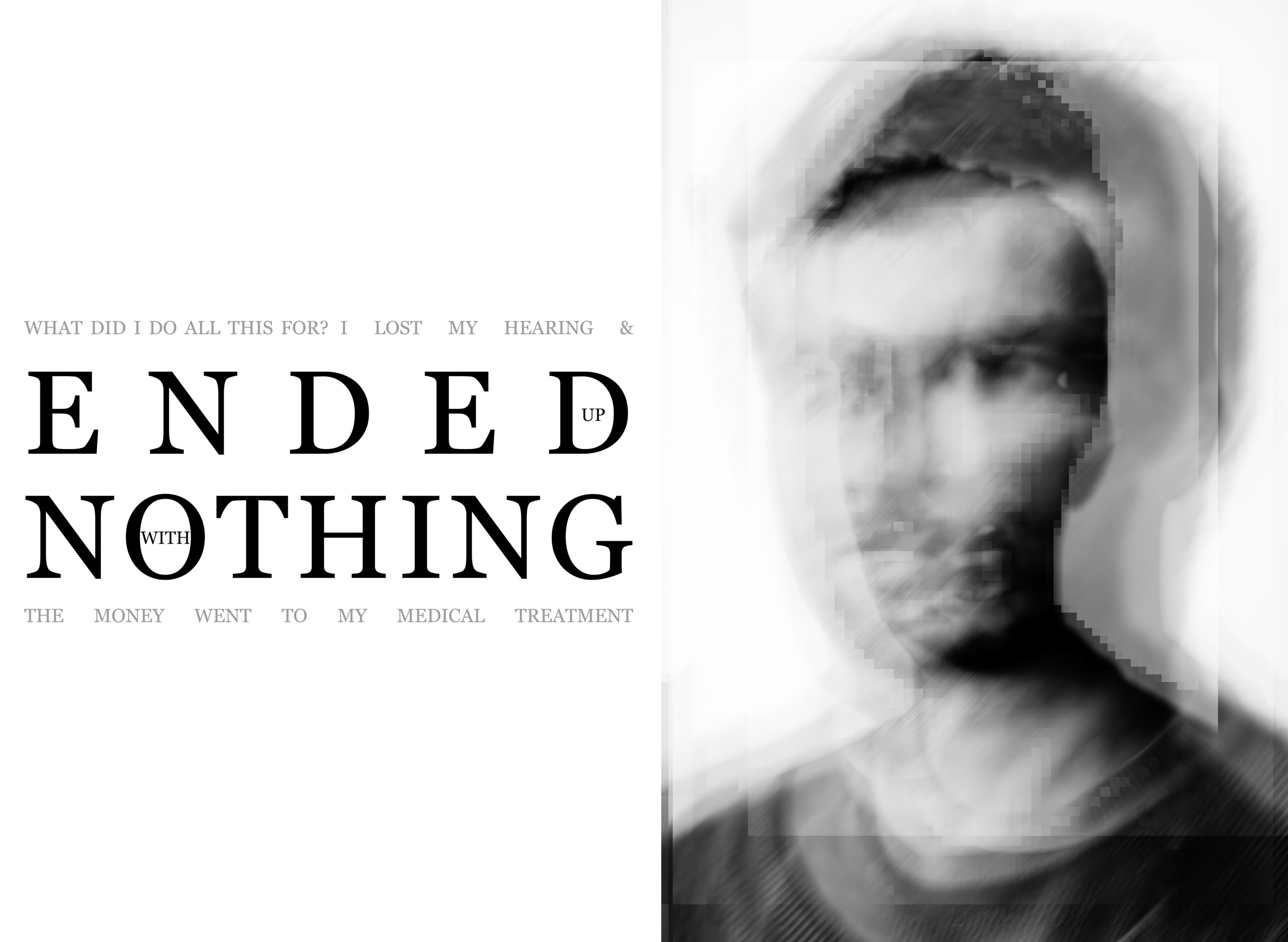 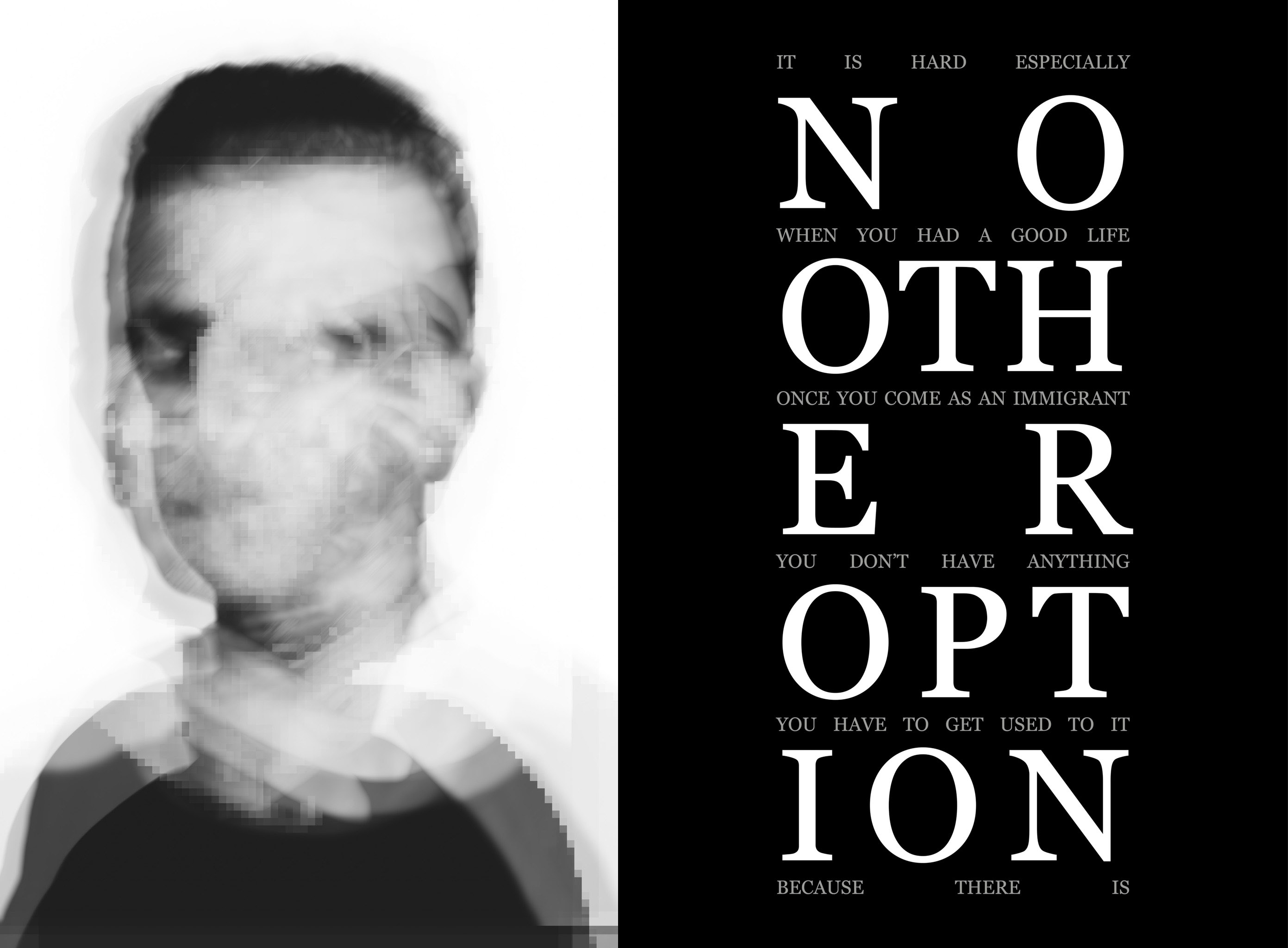 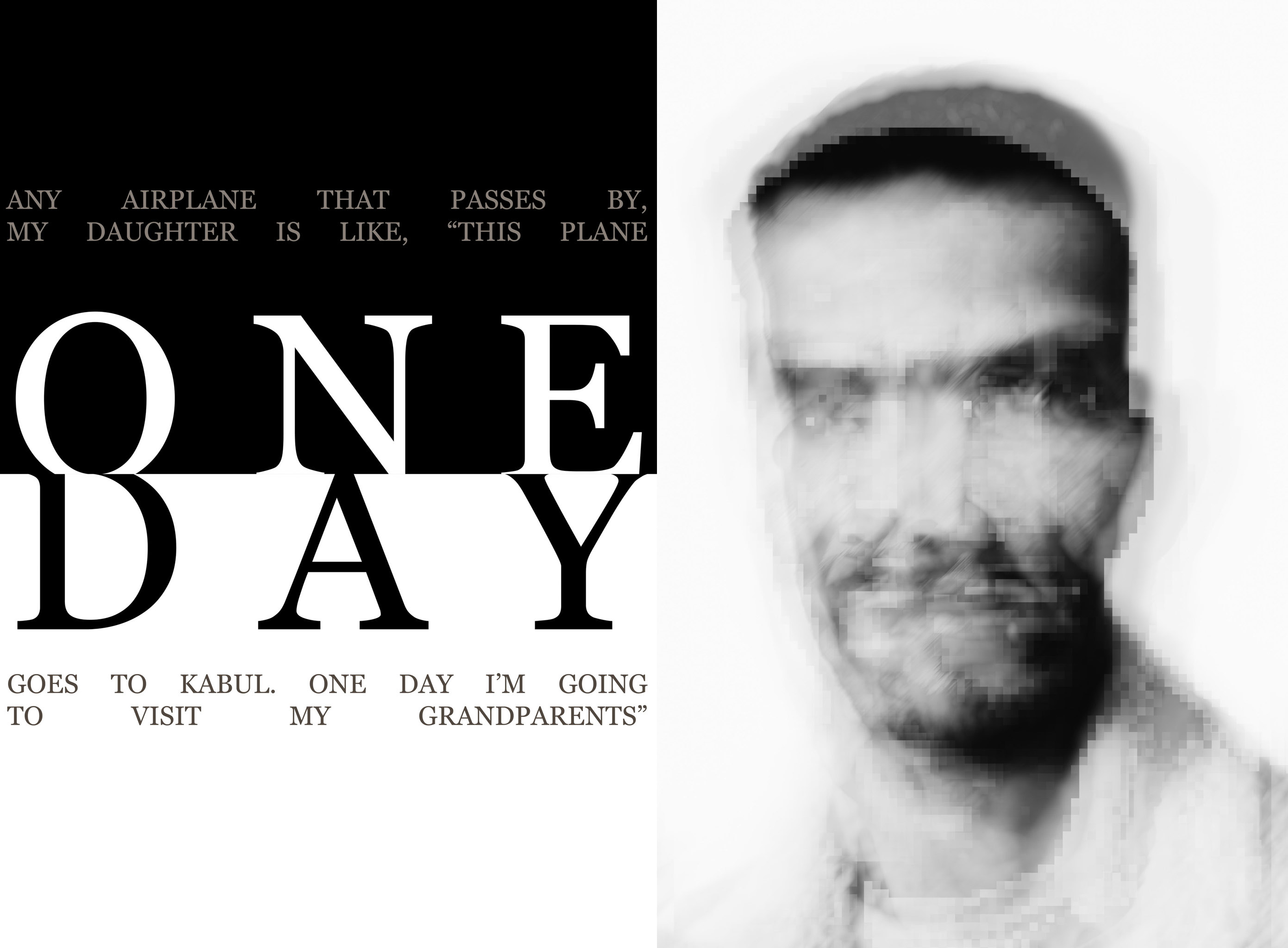 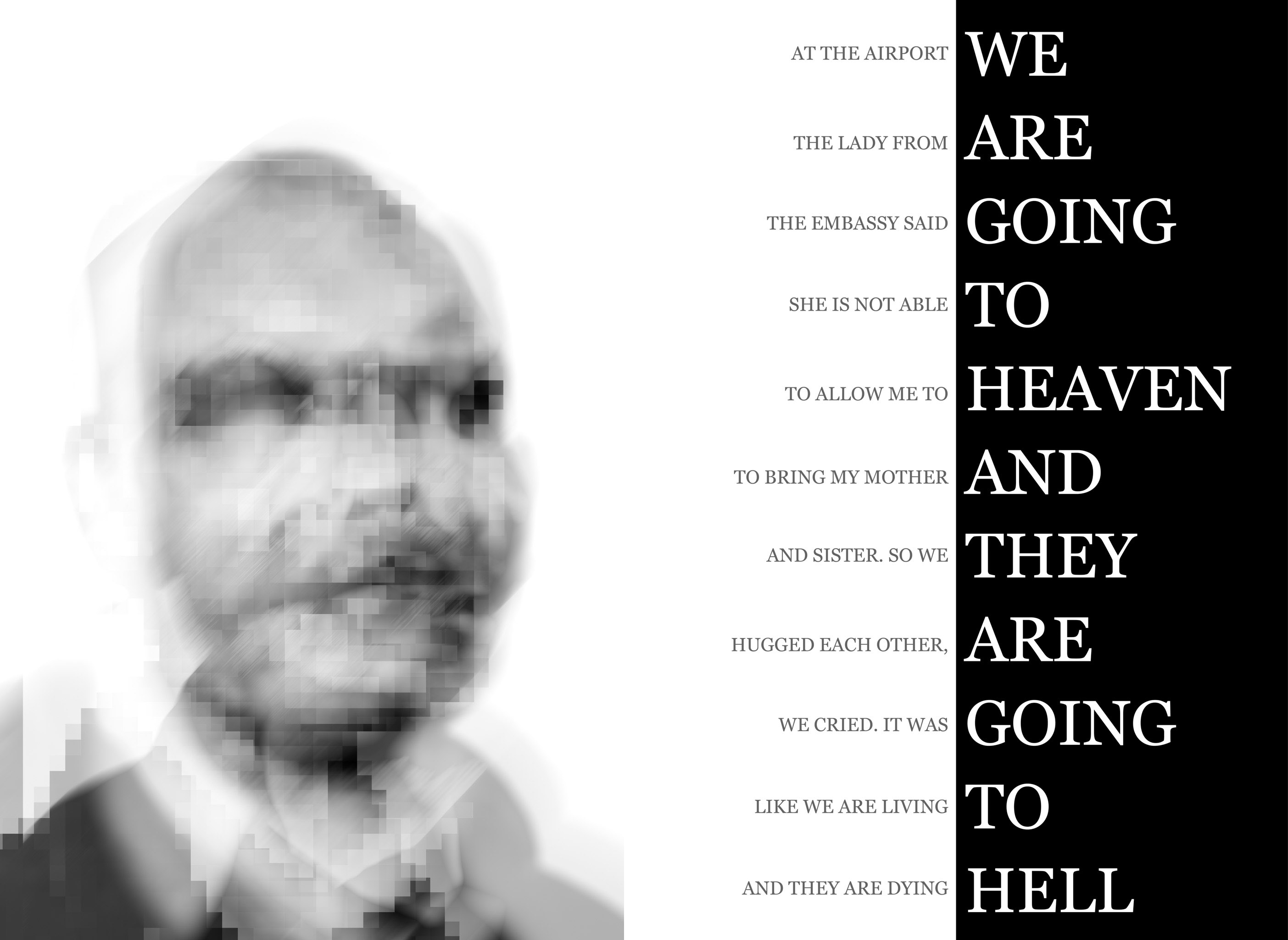 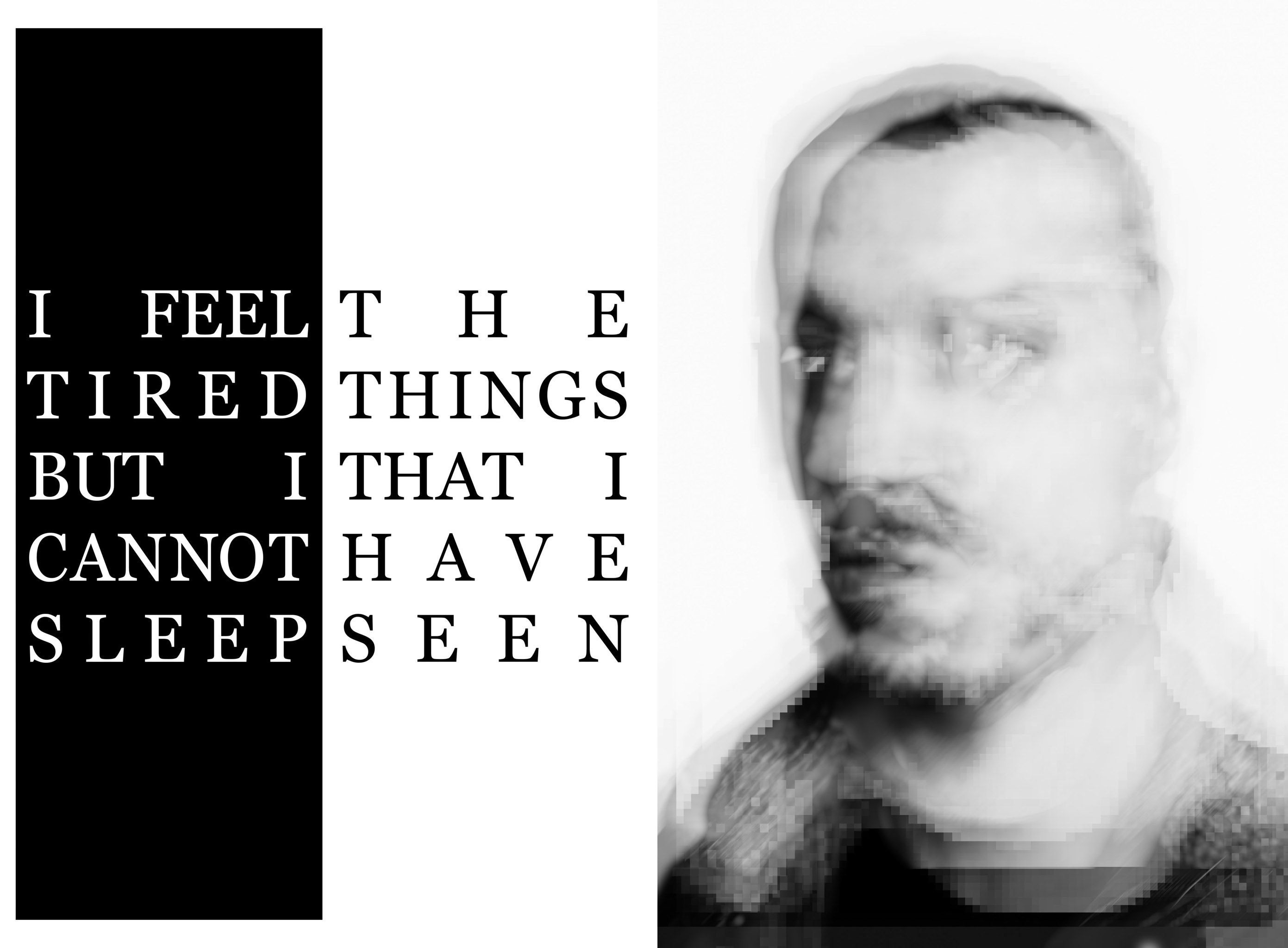 We Are Here Because You Were There:

Afghan Interpreters in the U.K.

Andy Barnham is a portrait photographer, a British Army veteran. He is also the son of a refugee; his mother and her family fled Vietnam in the closing days of the Vietnam War finding sanctuary in the U.S.A.

Andy discovered his passion for photography while serving as an officer in the Royal Artillery and carried a camera in addition to his rifle. Of the locations he deployed to during his service it was Afghanistan which influenced him the most; he learned Dari deploying as a military interpreter in Kabul in 2006 and volunteered to return in a front line capacity, mentoring Afghan National Army soldiers in Helmand Province, in 2008.

After leaving the British Army in 2009 Andy became immersed in the menswear scene and has photographed the best of British heritage and craft for luxury editorial titles for over a decade. The ‘scruffiest officer’ in the mess found himself taking sartorial photography on Savile Row and fashion on the runways of London, Milan and Paris.

Andy now focuses his camera on portraiture. He draws upon his unique combination of international, military and civilian experience to break down barriers and to engage and create relationships with his subjects in order to capture meaningful portraits.

Dr Sara de Jong is a Senior Lecturer at the Department of Politics at the University of York. Her broader research interests include the politics of NGOs and civil society, especially in the field of migration and gender; (post) colonial politics and brokers as political actors.
In 2017, Sara started a research project on the claims to protection and rights by Afghan and Iraqi military interpreters and other Locally Employed Civilians, which also investigated the strategies and activities of their advocates, including veterans, lawyers and civil society actors. Since then, she has conducted more than 75 interviews with interpreters and advocates in the UK, the US, Canada, Germany, France and the Netherlands, carried out observations of national and international political meetings, and analysed media, legal and policy reports.

Sara is committed to engaging with formal and grassroots politics, from providing oral evidence to the Parliament’s Defence Select Committees in the UK and the Netherlands, to volunteering as a befriender for women held in immigration detention centres. Sara is a co-founder of the Sulha Alliance, an organisation that campaigns for the rights of Afghan former interpreters and other Locally Employed Civilians who have worked with the British Armed Forces.

The Sulha Alliance supports Afghan interpreters and other Locally Engaged Civilians (LECs) who have served with the British Army. The organisation campaigns for the evacuation of those left in Afghanistan or stuck in third countries by calling for fair and transparent resettlement policies and procedures. It supports those who are resettled in the UK by providing advice, peer support, and signposting to partner organisations in the areas of employment, mental health care, and migration law.

The Sulha Alliance’s vision is for a comprehensive, fair and lasting solution that encompasses providing sanctuary for former interpreters and other LECs under threat, welcoming former staff and their families to the UK, recognising their service and enabling them to thrive in British society.

The Sulha Alliance was founded a few years ago by a group of Afghanistan veterans and an academic researcher who saw from their own experiences that former Afghan staff did not receive the treatment and protection that they deserved. They are supported by a strong team of Afghan former interpreters, who act as community representatives for the wider interpreter community in the UK and Afghanistan. The Sulha Alliance’s work encompasses media engagement, campaigning, research, and the provision of legal evidence.

We would like to thank the Afghan interpreters who have so generously offered us their time, hospitality, and stories.

We are grateful for the funding provided by Capita and the Department of Politics, University of York, for support of this project.

For a more comprehensive list of works please call or stop by the gallery.

Online purchases can be made at www.wasinwhy.com

" Conceptual and contemporary art with an emphasis on craft and minimalism. "